On October 22nd, I started implementing the Twitter strategy for my client ECWT on their newborn @w4techEU account. 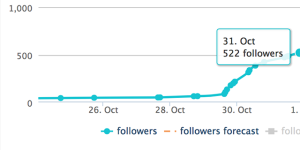 My secret? This post explains some of the ingredients!

Everybody on Twitter wants more followers. It’s social proof and more eyes on your tweets will grow your applause, amplification & applause rate. So if you want more people to follow you, adopt the behaviour everybody on Twitter is hoping for: #FollowBack!

Second, don’t do what everybody on Twitter is fearing for: being unfollowed after following back. That’s evil. Adopt a #FollowBack policy and announce it in your bio. 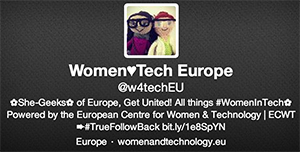 Of course, some rules apply. Accounts that don’t behave according to the common practices on Twitter shouldn’t be eligible for a #FollowBack. Write out these rules and link to them from your bio.

This is the #FollowBack policy we established for @w4techEU:

We followback everyone, except:

Send at least 8 Tweets a day

Twitter is so quick and overwhelming that it is hard to make your tweets noticed if you only send a few tweets a day. One tweet every hour seems to be the minimum to somehow stand out at the crowd.

For @w4techEU I am sending out 12 tweets a day (monday-sunday): 8 are new tweets or retweets and 4 are repeated tweets that were already sent out in the previous days.

For every new tweet, I try to include a comment, a hashtag and a picture, next to the (shortened) link and a mention of the  source.

Say thanks with a public mention

Next to followers and retweets, people on Twitter want mentions. Every mention is a shout-out about their existence and every mention will add up to their statistics (in case some ROI has to demonstrated). That’s why it’s wise to send out a mention to people that retweet or fave your tweets, and to those that listed you.

The same counts for thanking followers. I hate it when people send DM’s to thank me for following them, especially when they aren’t following me back so I can’t even respond them!

I admit I mistakenly did this myself when I started with Twitter, but those times are definitely over: followers now receive a tweet that thanks & welcomes them by mentioning them publicly.

The only way to gain a lot of followers in a short period of time is to follow lots of users in a short period of time. Twitter allows you to follow up to 1.000 users a day, but as soon as you reach a following of 2.000, there are limits to the number of additional users you can follow. This number is different for each account and is based on your ratio of followers to following; this ratio is not published [1].

To gain a critical mass of 500 initial followers at @w4techEU, I used SocialBro to follow the followers of similar accounts such as @GirlsDigital and @EUWomen, while filtering out inactive users: 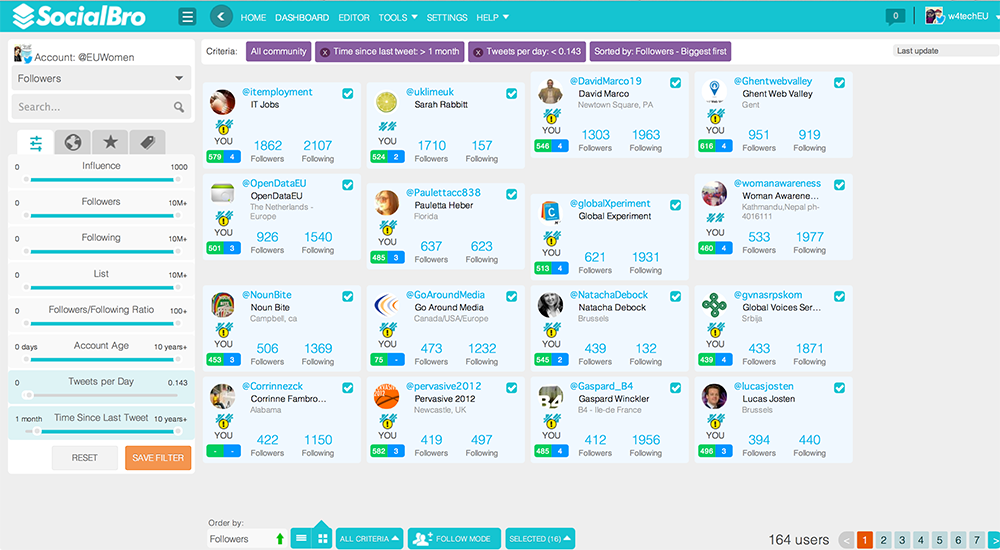 Before undertaking this type of activity it is recommended to read Twitter’s Following Rules & Best Practices, because Twitter monitors “how users aggressively  follow other users” and there is a risk of having your account suspended if you do this repeatedly.